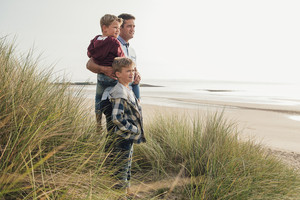 When joint physical custody (i.e., when a child spends more than 30% of overnights with each parent), is considered but not determined to be a viable option in a divorce or parentage case, a Utah Court may award “sole physical custody” to a primary custodial parent (i.e., the child spends less than 30% of the overnights with the non-custodial parent). After the Court has made this decision, the Court must next decide how much parent-time (sometimes referred to as “visitation”) to award to the non-custodial parent.

Importantly, when a Utah Court awards sole physical custody to one parent, both parents will still be awarded parent time with the child(ren). The “custodial” parent will always have the option to allow as much parent-time to the non-custodial parent as the two parents might be able to agree to, but otherwise, a Decree or Order will set a minimum parent-time schedule that will be awarded.

First, we will take a look at the three most common parent-time awards that Utah Courts grant to non-custodial parents:

The “statutory minimum” parent-time presumed to be in the best interests of children under 5 years old gets fairly specific depending on the age of the child. For example, children under 5 months old will typically spend a minimum of only 6 hours per week with a non-custodial parent (divided into three visits, in the custodial parent’s home only), some holiday time, and no weekends. But more time is awarded the older the child gets.

The “statutory minimum” parent-time which is presumed to be in the best interests of children 5 years of age or older typically allows the non-custodial parent to see the child(ren) at least: one 3-hour weekday evening per week (or a longer visit if school is not in session), every other weekend, some holiday time, some “extended parent-time” for vacations, and some virtual/telephone time.

Since 2015, Utah Courts also have the option to award additional time to a non-custodial parent’s minimum schedule via § 30-3-35.1 (for children 5 years of age or older). It’s essentially the same parent-time mentioned under § 30-3-35, except the child(ren) will also spend the night during the one weekday evening per week, will spend the night Sundays during weekend visits (rather than returning to the custodial parent Sunday evening), and will spend extra time on holiday visits.

For example, if one of the parents has relocated 150 miles or more from the residence of the other parent, the Court will likely grant the non-custodial parent, for children 5 years old or older: half the summer, two longer holidays per year (alternating every year), and the exercise of one weekend per month.

Another example of a more personalized minimum parent-time award is found in a recent Utah Appellate Court decision, Nebeker v. Orton, 2019 UT App 23 (Utah Ct. App. 2019). In this parentage case, the trial court found that it would have been in the child’s best interest for the father and mother to share joint physical custody, except that the parents lived 100 miles away from each other.  Their child was soon going to be attending full-time school, which made a joint custody time share impracticable under those circumstances, considering the distance between the parents. The trial court granted sole physical custody to one parent, which on appeal, the Appellate Court agreed was in the child’s best interests. But the trial court only awarded the non-custodial parent the statutory minimum parent-time pursuant to §§ 30-3-35 and 30-3-35.5. The Appellate Court found that when it is otherwise in the child’s best interest to have equal time with each parent, the non-custodial parent should be awarded “enhanced” parent-time; Enhanced parent time might not necessarily be in accordance with § 30-3-35.1 when there’s a 100-mile distance, but perhaps via “other possible accommodations” such as “additional weekend time or more parent-time over the summer vacation, fall break, spring break, and holidays.”  Nebeker at ¶ 38-39.

In any given case regarding custody and parent-time, a party is always best served when they have a knowledgeable, competent, and experienced attorney advocating for a custody arrangement that would allow the party to see their children as often as possible.-